English riots – effect is the cause?

The Archbishop of Canterbury’s New Years message has annoyed me a little. Whilst, I am aware that religious leaders are always going to advocate tolerance and forgiveness, I can’t help but feel that maybe this is part of the problem.

He says “we have to ask, what kind of society is it that lets down so many of its young people?”  “And a good New Year's Resolution might be to think what you can do locally to support facilities for young people, to support opportunities for counselling and learning and enjoyment in a safe environment”

What? Counselling!!! Did the sound of the windows smashing scare the little darlings or maybe the fact that the police are determined to catch them all, has frightened them? After all, it will be a first for criminals to be caught and punished in this country.

Psychologists, sociologists, community leaders, politicians etc have all come crawling out of their warm shiny offices to ‘blame’ the rest of society – name and shame our shortcomings.

This extract was taken from the BBC News.UK 24/10/2011
Demographics: Government figures Rioters Arrested

42% of those charged were white, 46% black, 7% Asian and 5% were classified as "other".
Two-thirds of the young people in court were classed as having some form of special educational need, compared to 21% for the national average
Three-quarters of all those who appeared in court had a previous conviction or caution.

“These shocking figures make clear that the poverty, disadvantage and disaffection experienced by this group are root causes of the August riots; and now their futures will be blighted by criminal sentences.”

How do they? What am I missing? What a random and pathetic statement!
Two – thirds have special educational needs – So What! – My best friend is severely dyslexic, she has raised three children, holds down 2 jobs and she has never ever been involved with the police.

Three – quarters have previous convictions – Oh.. then.. I see.. quite right, ‘we’ have let them down ……because if the courts had dealt with them harshly in the first place, then maybe they would have thought twice before being violent, stealing and starting life-threatening fires.

I think the biggest problem is over the last couple of generations there has been a massive increase in the amount of people analysing bad behaviour in our society – They have allowed the behaviour to be, not only be excusable, but actually justifiable.

For example:
'The Labour leader, Ed Miliband, says his party will help set up a public inquiry into the causes of the riots if David Cameron continues to insist he will not hold one. He wants some form of inquiry that gives residents an opportunity to describe what their lives are like and what may have caused the eruption of violence. He has also spoken of the need for a commission on social equality’

For goodness sake that’s just what we need, an attitude of: ‘lets talk about it, poor you, ’

No – what this country needs is a firm mum attitude:

You act like ‘this’ and you get ‘that’ consequence
I don’t care why or who started it, but it stops now.
You are going to school; you are doing your homework, or no TV.
Change your tone of voice and drop the attitude or go to your room
Respect is earned and not a given right and it also cuts both ways.

Stop making excuses for poor behaviour and instead, deal with it.
Punish – yes, clear boundaries – yes, inspire for better – by all means, good education – of course, but the rioters behaviour was an attitude and we all know it. The attitude of ‘something for nothing’ and waiting for success to fall into your lap rather than working hard and striving for something you want.

Anyone who saw the footage of those disgusting rioters could tell that those 'little sweethearts' weren’t let down – check out the labels on their sportswear for a start. And what about the fact that a lot of them came from middle class families? Where’s the poverty argument then?

My opinion of the riots are a bit one sided. On the first night of rioting I was on the internet when the news came through – I watched in horror at the live pictures of the rioters looting and burning peoples businesses. I have never felt such hatred rise up inside if me, mostly due to the fact that they were healthy. "Look at them running down that street to throw bricks at the police" – I then went back to scouring the internet to see if anyone else had had to stop their child’s cancer treatment early because the side effects from chemotherapy were killing them.

Then I got news that my nieces shop had been destroyed. We’re not a rich family. Her shop was a venture with lots of other girls who had worked so hard together to get that shop up and running. They hadn’t long opened after years of planning, saving and sheer effort. The rioters had taken everything, smashed the windows and had even taken the front door.

Another one of my nieces became livid when a rioter, who had been arrested, claimed he'd joined in due to boredom – she is 17, attends full time at college and works part time. She is too tired to be bored – it’s the pathetic excuses that make you mad. 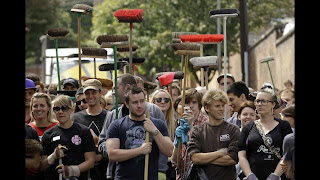 On a positive note, I was really proud of the way the people in these cities, including the young, came out and cleaned up the mess. We must always remember it was only a disgusting minority that took part in the riots for which there was no excuse.